Dustin and Jonathan reluctantly take a look at the 3-0 loss in Nashville, the 0-0 draw in Salt Lake, and the themes that have emerged from these latest 2 away matches.

Then, El Presidente de El Matidor, Luis Dollar joins the show to talk about how the season’s working out, issues with security, moving supporters groups to the Southwest corner of Toyota Stadium, and much more!

FC Dallas hosted Sporting Kansas City on Wednesday night after a weekend off due to a COVID outbreak with Minnesota United. From the start Peter Vermes’ side looked to frustrate FC Dallas, rather than outright going for the win. They obviously saw FC Dallas struggle against Houston’s bunker and looked to exploit the same weakness.

Thankfully for FC Dallas, it seems as if Luchi Gonzalez has also been working out ways to break down a compact, deep-lying defense. Let’s take a look at how they managed to finally create quality scoring chances and even score a goal against a defense set up like this.

Balls Into The Box From Deep

Luchi loves himself some methodical buildup play. Unfortunately, this allows defenses to get set up and become more compact as the ball progresses into their end, thus making it harder for FC Dallas to get the ball into dangerous areas. FC Dallas has routinely struggled to get meaningful penetration into bunkered defense. These teams willingfully scede possession on the perimeter of their defensive blocks, knowing that they’ve got the numbers inside the block to cut off passes and sufficiently mark FC Dallas’ attackers.

In the past we’ve seen Gonzalez’ men attempt to counter this by dropping Ricaurte deep to be a creative part of that methodical buildup. However, in this match we saw both him and Tanner Tessmann dropping deep and sending balls to runners into the box.

Ricaurte set up fairly deep in this match and sent several long balls to Jara running into the box. Here he picks up the ball right in the middle of the pitch and fires the ball up field, skipping lines and not allowing SKC time to compress their lines and congest passing lanes pic.twitter.com/Iw2zN7Sdff

Ricaurte attempts to find Jara with a long ball again as he makes a run into the box following a quickly taken free kick. pic.twitter.com/54da8WWeqS

Did something always come from these long balls into the box? No, but continually taking the ball into the final 1/3rd via the wings becomes predictable and allows the defenders to cheat a little bit — shifting to the side a little bit here and anticipating passing lanes there, being one-dimensional just makes things harder. Anything you can add to the arsenal to keep defenses honest is a good thing.

Another tactic that FC Dallas used to help break down the SKC bunker (and the one that ultimately provided the break-through) was getting an overwhelming number of players actually into the box to provide targets for the playmakers on the wings.

All too often, FC Dallas either has all of the players standing around the edge of the box waiting for some sort of cut-back pass, or they just have Jara in the box by himself with too many players committed to overloading the wings.

FC Dallas work the ball down the wing, but only Jara is in the box to receive the cross, while the rest of the attackers set up camp outside of the SKC penalty area…presumably to try and win a second ball? 🤷‍♂️ pic.twitter.com/PA7m5UNTIc

But towards the end of the 1st half, something amazing started happening. When crosses would come in from the wings, there were more FC Dallas players in the box than the defenders could handle!

Following a bit of a broken play, 4‼️ FCD players work into the box and Busio is late to aid his defense, allowing Jara to find space and get on the end of the cross. pic.twitter.com/45ScAAp6TM

You saw it again just a few minutes later, resulting in a Ryan Hollingshead goal. The buildup on the wings and the cross will get all the hype, but instead of watching the ball, watch it again and keep an eye on the box. FC Dallas committed enough players (4 again!) into the box that all SKC defenders were tied up marking them, allowing Hollingshead to slip into the box on the backside, unmarked, just in time for Bryan Reynolds to pick him out with the cross.

Ricaurte and Reynolds combine again to create the opener for Ryan Hollingshead!

That would be Ryan's 2nd goal of the season but I think it might be ruled an OG for Tim Melia. #DTID #FCDvSKC pic.twitter.com/TfCrdSdgIg

That having been said, FC Dallas was also vulnerable to this tactic as they looked to hold onto the lead late in the game. It’s a balancing act between bringing midfielders into the box to mark players, and opening up too much space in the dangerous areas just outside of the box.

Late in the match, Cameron Duke sneaks into the box with the FCD defenders all marking someone. Santos checks his shoulder, but its too late. Luckily the inbound cross isn't very accurate. pic.twitter.com/NvTJLuiLDc

This was arguably my favorite match from Tanner Tessmann yet. He got the start in the #6 position (Central Defensive Midfielder), presumably to give Thiago Santos a rest, and he made the absolute most of it. Rather than describing it all or gushing over him, I present to you a collection of Tessmann moments that stood out to me during the match. They’ll do the talking.

Tanner Tessmann tracks back, supports the defense, and blocks a shot attempt. This is one example of many of Tanner supporting in defense. It's very important for a CDM to be defensively aware, especially off of a turnover when the fullbacks are committed up the field. pic.twitter.com/icBEVR15Dc

Tessmann is very calm under pressure. Here he receives the ball, feels/sees the defender commit to his left, and immediately spins away from the pressure. pic.twitter.com/DjVa1likSg

This one was so fun, it made this article twice!

Here, Tanner Tessmann not only intercepts the ball with an outstretched foot, but he controls it AND sends a yummy through-ball to Pepi (who took off as soon as T-Tess got the ball) pic.twitter.com/dnTfRYp6dQ

Tanner’s not a finished product by any means, but I’m excited to watch him keep growing as a professional!

Dustin and Jonathan talk about the recent Reggie Cannon interview in The Crack Podcast that has fans outraged. They also break down the 1-0 win over Kansas Cit, Tanner Tessmann starting as the CDM, and how FC Dallas was able to break down SKC’s low block.

Plus, they take a quick look ahead at what the end of the season might look like for FC Dallas. 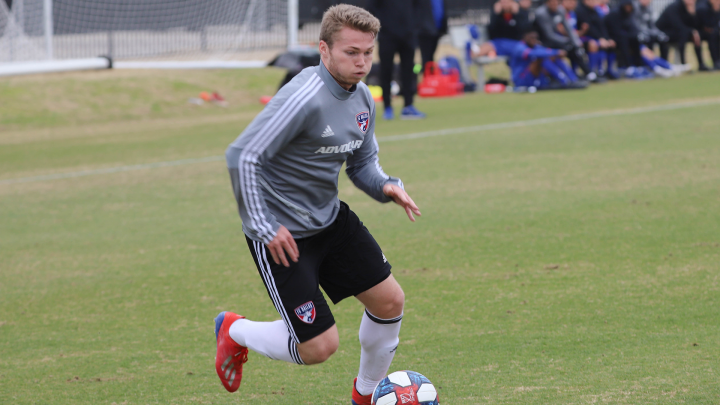 FC Dallas left back, John Nelson, stopped by for a chat with Dustin.

They talked about John’s path to the pros, decision to leave UNC early, some of his famous friends, and much more!