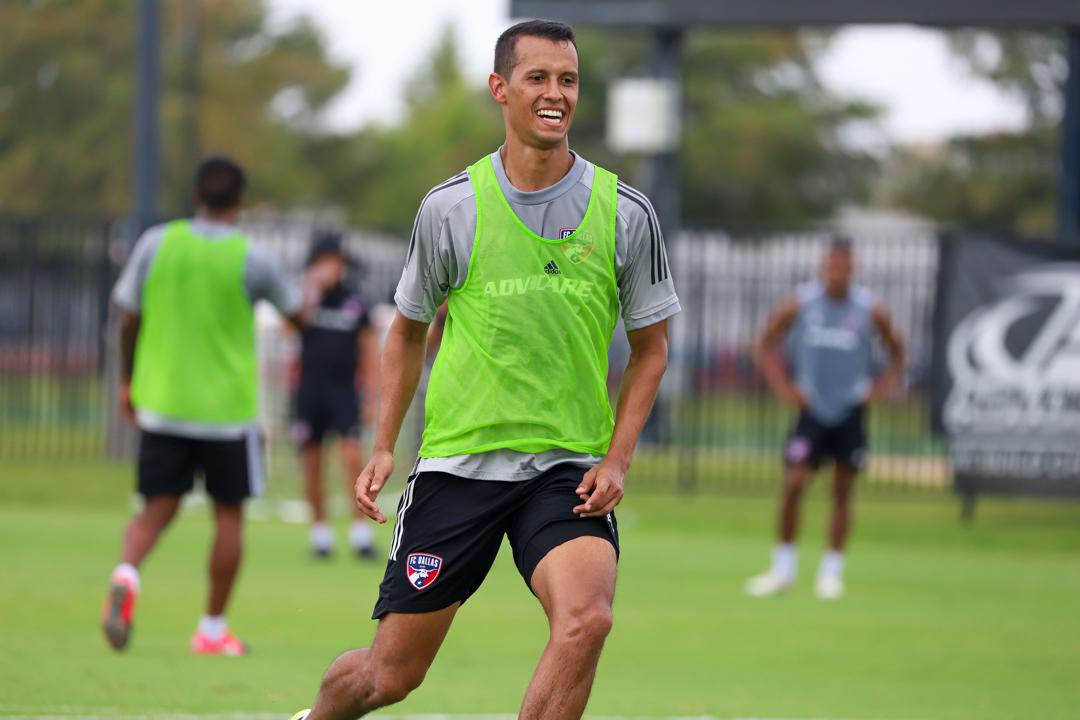 *Note: No gifs in this one due to time constraints

At this point I’d like to throw out a reminder that these articles are not endorsements of the tactics, just attempts to understand what we saw and what the rationale might be.

With that having been said, let’s talk about the formation and tactics FC Dallas tried to use to start the Minnesota match.

Coach Gonzalez opted to start out using 3 center backs: Bressan on the right, Ziegler on the left, and Hollingshead?! in the center. Many people talked about this formation as a 3-at-the-back because FC Dallas has used it in the past, but in actuality this was 5-at-the-back with the outside backs acting as defensive fullbacks rather than wingbacks. After the match both Gonzalez and Hollingshead described wanting to sit back defensively, absorb pressure, and selectively counterpunch. We all saw how it went, and this begs 2 questions:

2 reasons. The first and most obvious reason is numbers. The more players behind the ball, the less options and space the opponent has to work with. As Joseph Lowery told us in our tactics episode, the best way to control a part of the field is to overload it with more players than the opponent.

The second reason is width. Minnesota tends to get a lot of its chances by first running into the side channels of their attacking 1/3rd. Let’s look at Minnesota’s past two matches.

You can see that a majority of their passes in RSLs half were either on the left or the right, especially as they progressed towards the end-line.

The same was the case in the Houston match. Because teams tend to cross more when they’re chasing a goal, I’ve only included the successful passes and all crosses in this chart when the game-state was even (the first 28’)

It’s very obvious here that Minnesota was pushing the ball wide as they entered the Houston zone.

Coach Gonzalez might have been attempting to thwart this by allowing the back line to take up more space horizontally, figuring that shifting over to meet a player on the wing with 5 defenders would create less of a worry that they’d be vulnerable to a cross on the back side than if they only had 4.

Why Hollingshead was the center CB

After the match, Ryan mentioned that the game plan was for him to help break lines vertically in the center of the pitch when the team pushed forward. He also mentioned that the team did a very poor job of pushing forward, which negated the benefit of having him in that spot. You could see glimpses of what they were trying to do though, especially as he got forward to start the play that led to Ricardo Pepi’s goal.

This was, perhaps, a personnel decision that Luchi Gonzalez wants a do-over on.

Minnesota United’s first two goals prove that tactics amount to nothing without execution. You can overload the defense, but it won’t help if you keep gifting possession to the other team in dangerous areas. Within the first 15 minutes, Hollingshead turnovered the ball over in front of goal, leading to Mason Toye’s opener and Bressan had a similar turnover that nearly led to another Minnesota goal.

In addition to passing issues, FC Dallas also suffered marking issues. Occupying the “right” spot on the field is important, but ultimately useless if you don’t mark the people in the spot you’re in. This was the case for Kevin Molina’s goal (Minnesota’s 2nd). The Loons played the ball over to the left of FC Dallas’ box (just like Luchi had the team set up to prevent), but then the entirety of FC Dallas’ defense just watched the ball. Bressan never checked his surroundings and Molina slid into the box, unopposed, and scored.

Sometimes I wonder if FC Dallas doesn’t need to hire a coach whose sole job is to constantly shout at defenders in training to swivel their heads.

Down 2-1 at halftime and chasing the game, Luchi changed the formation, tactics, and personnel. Johnny Nelson made way for Ricaurte, Hollingshead shifted to LB in a 4-3-3, and the team started to play much more direct. Ricaurte made an immediate impact and the team felt much more threatening with him in the mix. He played passes into places no other FC Dallas player besides Paxton Pomykal would even dare try. He contributed to buildups. He even tracked back on defense and put in hearty tackles. Rarely does the introduction of one player change the look of a team as much as Ricaurte did.

The only downside to his debut was that far too often he would look up in search of a player making a run into the box, only to find that no one had made the run. Someone on the 3rd Degree Podcast mentioned this and said it well when they said “it looked like FC Dallas isn’t used to playing with a playmaker on the field.”

I’m going to say it. FC Dallas is a lot more fun to watch when they’re chasing a game. What’s so frustrating is that you can tell that Luchi wants them to play that way even when they’re not losing. The main difference is how quickly they play the ball after receiving it, often one-touching it between 2 or 3 players. If you listen closely, you’ll often hear Gonzalez shouting “Rondo! Rondo! Rondo!” on the sidelines to urge his players to play the ball more quickly and make faster decisions. This is not the first match where the pace of FC Dallas’ play seemed to speed up in the second half. You could make the argument that this style of play is deliberate or even tactical, if not for a certain animated coach on the touchline.