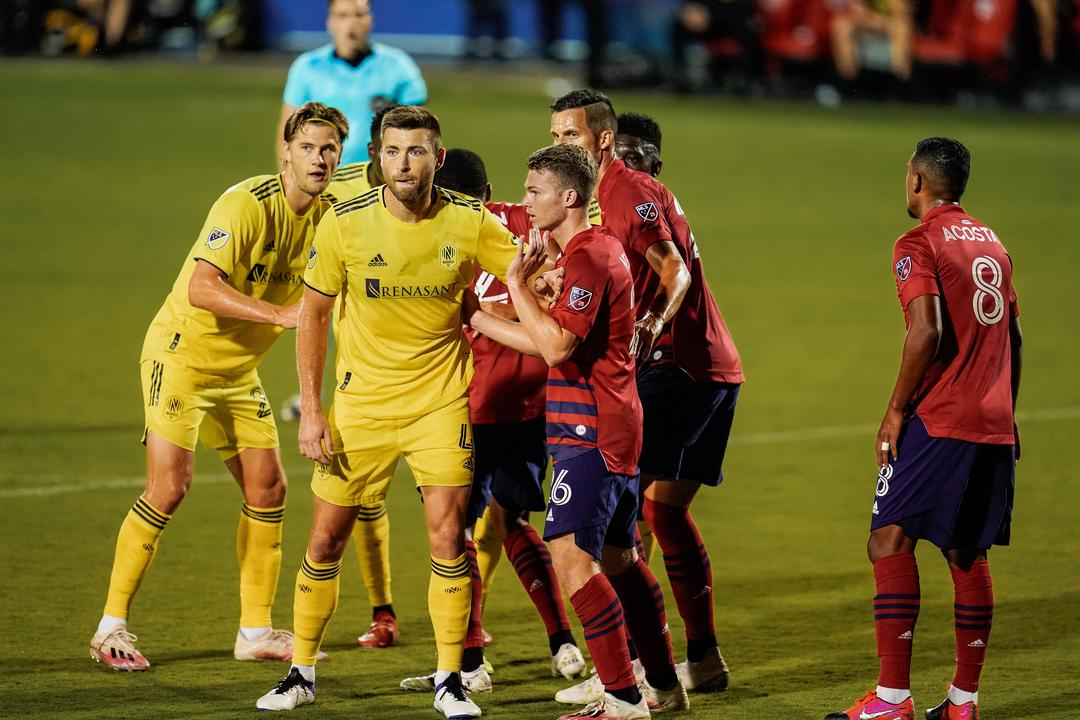 Sunday night (morning) brought the repeat fixture of FC Dallas and Nashville SC’s return to play. With it came a repeat in the offensive struggles for FC Dallas. Given that Luchi Gonzalez likes to lay the foundations and build upon them, let’s take a look at how the team built upon the tactics employed in the first meeting of the two sides.

Just a note, no gifs this edition. I spent that time getting the podcast out the door.

In the previous article, I talked about how FC Dallas were very intentional about how they progressed up the field. In retrospect, it felt very much like a Luchi Gonzalez pre-season match. If you’ve ever watched one, you know that they’re very scripted and the team very rarely deviates from the script. However, he definitely opened the script up for improvisation in Sunday’s match, if only just a little. The progression felt much less like a list of checkboxes, and more like a “Choose Your Own Adventure”.

In the first match, the only options used by the players to work the ball up the field was the series of passes that were next in the script. If their next step/pass was blocked, they recycled the ball back to the CBs and started again. On Sunday, they used the script from Wednesday as a jumping off point, but didn’t let one blocked passing lane stop them so easily.

They generally tried to find the next player in the sequence, but If the next passing target wasn’t available, the player on the ball had the freedom to explore two more options.

Option 1: Look for open players in the next line upfield. Having an outlet available in a more advanced position than the next progression step (aka passing up to Barrios or Pomykal when Santos or Acosta had the ball instead of trying to find Jara/Ferreira) meant that the team could just “skip” that Nashville line and not have to worry about breaking through it.

Option 2: Look for space to carry the ball into yourself. Players taking the license and freedom to turn and dribble into space caused the Nashville players to react, opening the passing lanes that were previously blocked.

I don’t have the exact stats, but it definitely felt like their possession spent less time cycling between the defense and the defensive midfield.

Sunday’s match saw the introduction of Franco Jara as the “false 9”, rather than Jesus Ferriera playing at the 10. It’s a subtle difference in responsibility and roles, but it had the same effect in the end. This time, though, the problem wasn’t creativity on the ball alone. It was getting into a position to even receive the ball AND doing something with it after they got it.

As FC Dallas worked the ball up the field, far too often Jara (and even Ferriera when he came on) did a rather poor job of utilizing the space between the Nashville lines. One possession, they’d be too close to Nashville’s midfield line and couldn’t get open. The next, they’d be too close to the defense and turn the ball over quickly after receiving it. The result of Jara/Jesus being too close, vertically, to the defending midfielders is that it makes it very easy to be marked horizontally, cutting off passes and pressuring the moment a pass is received. Being too close, vertically, to the defensive line has the same exact consequences.

To be fair, Nashville did a fantastic job of being compact in defense. They didn’t always leave a lot of space between the midfield line and the defensive line, but the space was there and FC Dallas’ linking players need to do a better job of dynamically finding that space.

John Nelson Has A Field Day

Ryan Hollingshead missed Sunday’s match against Nashville (and will likely miss the next two upcoming matches as well) due to attending a remembrance ceremony for his late father. He traveled via commercial airline, and thus must now quarantine himself away from the team. In his stead was 2019 MLS SuperDraft pick, John Nelson.

In the first Nashville match (and really almost every match he’s played LB in), Hollingshead has been very actively involved in the offense. He overlaps with the winger and positions himself VERY high up the field.

Given that this was Nelson’s first game since June of 2019, and that pushing high up the field can create a liability in defense and leave the FB on a defensive island, Luchi opted to have him stay home more and focus on the defensive aspects of his game. It’s often wise to ease a player back into match sharpness in order to prevent them from being caught-out and risk ruining their confidence (Jacori Hayes at NYCFC, anyone?). Nelson will need that confidence as he’ll be filling in for Hollingshead for at least the next few matches.

However, keeping the fullback from fully committing to the attack creates ripple effects across the rest of the team in how the team performed offensively. If the back doesn’t venture very far forward, then that means the winger is likely to have to drop deeper to connect and provide options as the ball moves through the midfield. Then, there’s nobody up top when options are sorely needed to break down defenses like Nashville’s. This likely contributed to some of Dallas’ issues in finding a breakthrough goal.

A Better Matchup On Friday…Hopefully

FC Dallas now turns to Houston on Friday to try and stop their scoreless skid. On paper, this should be a much better stylistic matchup for FC Dallas, as Houston is more adventurous than Nashville. If they can prevent Elis and Quintero from scoring, FC Dallas should be able to both find more space to work in and exploit the relatively slow Houston defense.